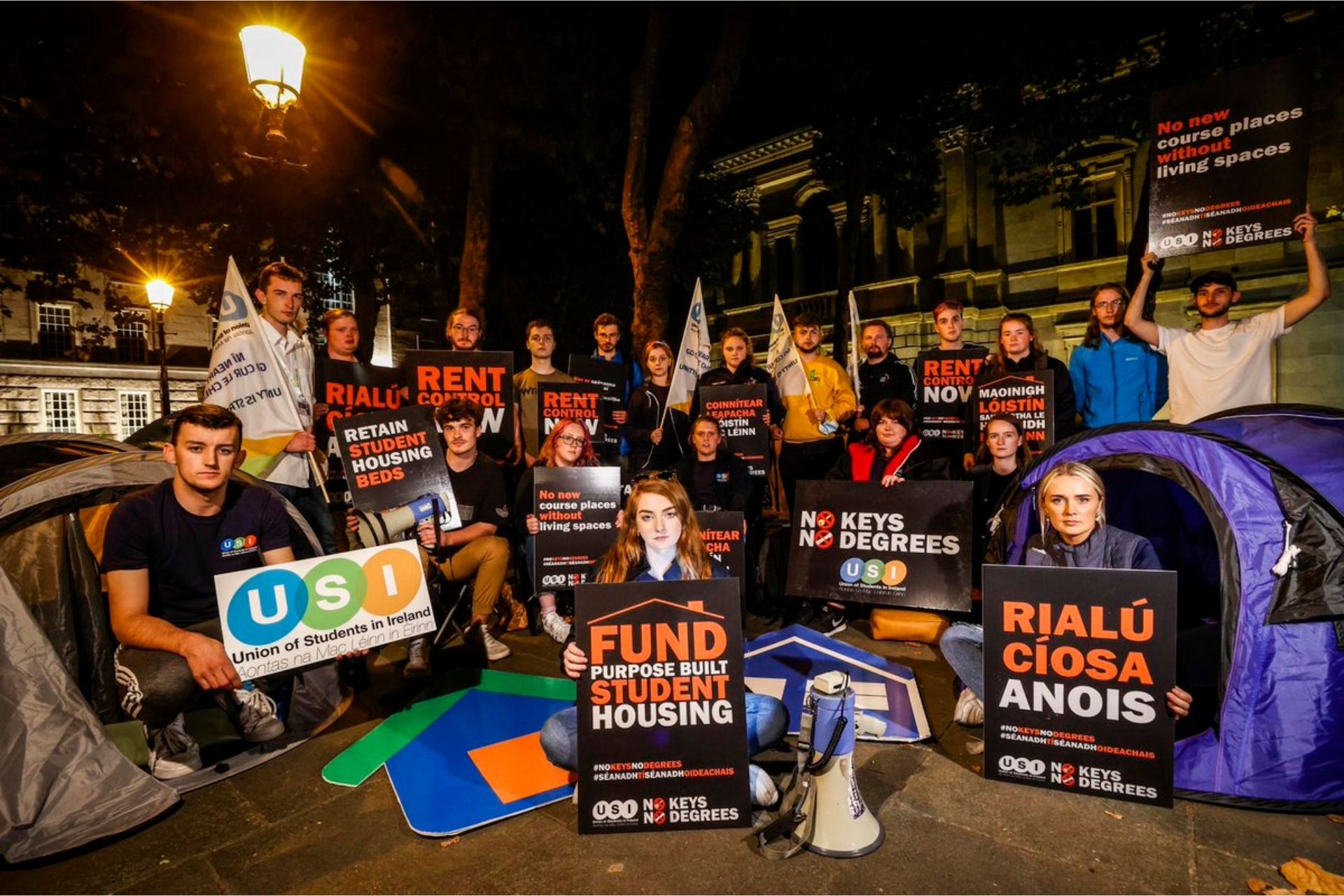 A group of students gathered outside the Dáil today to draw attention to the third-level housing issue, which they claim is worsening.

The Union of Students organised the demonstration in Ireland, which claims that some students are being forced to defer or drop out of their third-level courses due to a lack of adequate housing.

Some of those in attendance planned to spend the night outside the Dáil to draw attention to the issue.

Students are angry and frustrated, according to USI President Claire Austick, who believes the government has overlooked the matter for far too long.

Ms. Austick argued on RTÉ's Today with Claire Byrne that housing scarcity is not a Covid-related issue and that students should have the right to stay in safe housing.

She claims that students sleeping in hotels or B&Bs will be unable to cook for themselves or fully appreciate the college experience, and she advocates for more purpose-built housing.

"Access to education is not just about getting in the door ... it's also about having a place to stay and that often gets forgotten about," she said.

Ms. Austick stated that the government must commit to long-term sustainable solutions and provide capital grants to third-level institutions to provide housing so that students do not face the same issues in the future.The State has been urged by Dublin City University (DCU) to establish mechanisms to support the construction of affordable student housing.

‍
In a statement released ahead of the demonstration, the institution criticised plans in the government's Housing for All project, claiming that they are founded on a flawed assumption.

It questioned the plan's premise that extending borrowing capabilities to institutions across the third-level system would alleviate the supply problem.

DCU said in a statement that "escalating construction prices mean that it is now simply uneconomic for institutions to undertake the development of student accommodation," despite the availability of low-cost financing from the European Investment Bank and the Housing Finance Agency.

According to the university, the cost of building a single new student bed is already above €150,000, "and this is projected to climb further with construction sector inflation running at over 10% per year."

It argued that the rental levels that would have to be charged to fund the building and provide for continuous investment to maintain the accommodation would be beyond most students' and their families' ability to pay.

While the university has no proof of deferrals owing to a lack of housing, "we are aware through our Students' Union of the enormous hardship this gap is putting on students and their families," according to the institution.

The usage of local hotels and B&Bs as a stopgap remedy, according to the report, is not sustainable.

"We are seeing B&Bs and hotels in the surrounding areas filling up to capacity as a means of emergency accommodation for students, and many students will choose to defer as attending college this year is simply unaffordable and unsustainable."

Mr. Rooney demanded quick action to avoid other students from deferring or dropping out.